This time I welcome Chris Handy to Go Forth. Chris is an accomplished game designer and has a fantastic and unique set of games on Kickstarter right now.

Tom: Hi Chris, remind us of your gamer cred.

Chris: I’ve got tons. I hosted game nights for friends as a teenager. I was obsessed with Magic: The Gathering when it first arrive in the early 90’s.  I designed my first “professional” design (Long Shot, Z-Man Games) in 2000. SimplyFun released 3 of my party games. In 2007, I launched GatePlay.com.  Cinque Terre was released with Rio Grande last year.  Those are the noteworthy items.

Tom: Most people know you for Long Shot and Linkity. Tell us about those two games first.

Chris: Long Shot is a party/strategy hybrid horse racing game for 2-8 players.  You can buy horses, bet on horses (even when other’s own them), and earn money and manipulate the race in all sorts of way. Long Shot provides a very exciting gaming experience that closely resembles a real horse race. 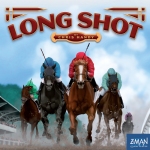 Linkity (which I haven’t been asked about in a while!) is a fast word-association game that allows players to vote when the chain of suggestions derails.  It’s light, fun, and also plays up to 8 players.

Tom: I hear Longshot is indeed a good party game. I’ve not had the chance to play it yet though. My oldest daughter just returned from Italy and love Cinque Terre area. Your most recent game is Cinque Terre. What’s that one about?

Chris: It’s about Cinque Terre!!!  My wife went with her brother the summer before we were married.  She raved about. I wasn’t all that interested until I saw an article about CT in a local newspaper travel section. The feature picture was a cart with different produce, and I was working on an idea that allowed players to put different produce cubes in their cart and sell them at different locations.  So, I quickly paired the real place with some mechanisms I was working on, and it has become an approachable, but deep, Pick Up and Deliver game.  I very please with the final production.

Tom: I must play this! You have some new games that have just hit Kickstarter. That is what we are here to concentrate on this time. Tell me about Pack O’ Games.

Chris: Pack O Game is a series of small decks (card games).  Each has 30 cards, 1 inch by 3 inches, and a single sheet of rules. There are 3 levels of gameplay: 1. Casual, 2. Intermediate, 3. Challenging. Each game has a unique theme, gameplay, and rating. Currently, there are the “Core Four” games as the main KickStarter campaign. Each Stretch Goal is a NEW GAME, that is given to backers that pledge at the $20 level or higher. By the end of the campaign, the $20 pledge level will give you 8-10 games, and possibly even more.  It’s an unbelievable bang for the buck. 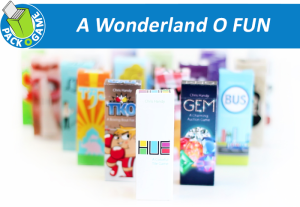 Tom: The Kickstarter is doing gangbusters and I hear a lot of very positive press about all these games.

What’s the next step with them? Any aspirations of hitting mass market stores?

Chris: YES! We have seen the appeal of Pack O Games cross over to non-gamers in a way that I always hoped our flagship “Gateway games” would. There’s something about the price, size, look/design, and being card-based, that puts people at ease.  It has been a thrill for me to see this, as I’ve always wanted more people to play good games.

We are looking at different Point Of Purchase displays for the series that will be helpful to retailers.  We plan to be on amazon.com in several countries as well.

Tom: I’ve played HUE and GEM. I enjoyed GEM but HUE was super fantastic! I loved it. And they’re so tiny.  Talk some about some of the rest of the Pack O Games.

Chris: Sure, There’s TKO, a 2-player boxing game that uses a “rock paper scissors” mechanic, but adds more information and strategy.  And, FLY, is a 3D, dexterity (but, not speed) set collecting game in which you drop a fly swatter from the height limit to try to completely cover flies to collect cards.  Both of these are the most casual games we have in the set and are a LEVEL 1 (Casual) rating.

And, there are even more that we haven’t announced!

Tom: I’m excited about these. Looks like it will be 10 games for about $24. That’s hard to beat. Let’s switch gears a bit and just talk about you as a gamer. What was the one game that knocked your socks off so far this year?

Chris: I enjoyed playing Five Tribes at Alan R. Moon’s “Gathering of Friends” this last spring, and I know it launched there. I’m looking forward to playing the final production.

Tom: Five Tribes was a big hit at GenCon and sold out very quickly. I’m hoping some locals picked up copies. What about it was so good?

Chris: There’s a mancala mechanism that is fun.  But, I felt there were 3-4 solid paths to victory that you could choose to get to a win.

Tom: What is next for you? Any more games in the queue?

Chris: A TON!  I can’t wait to get through some of the “business” stuff of this campaign and get back to the Pack O Game prototypes.  There are some fantastic games ahead!

Thanks for joining me on Go Forth, Chris. It was great talking to you. I look forward to Pack O Games. Readers, you have only a couple of days to jump in on the Kickstarter. Go here to get your Pack O’ Games. You can also find out more about what Chris is doing here at Perplext.com.