I’m really happy to have A. J. Porfirio of Van Ryder Games with me this time. Van Ryder Games has a new game on Kickstarter and AJ agreed to tell me about it. Let’s find out more about Salvation Road.

Tom: AJ, it’s good to have you back on as my guest. Update us on what’s going on with Van Ryder Games.  Tell me more about Salvation Road.

AJ: I discovered Salvation Road at UnPub 2014… I think that was UnPub 3? The year helps me more than the number… anyway, I digress. To be honest I was a bit disappointed with the lack of Thematic games at that years UnPub. I was feeling like I wouldn’t be signing a game when our mutual friend, Chris Kirkman, tipped me off to a game in the corner called Salvation Road. We sat down with a 3rd player and just had a real blast playing it. I evaluated the game for a month or two and decided to sign it.

Tom: Tell me about the game play.

AJ: You control characters moving around in an abandoned town looking for resources. The game uses an action system and you get 2 per character per turn. You need to gather up food, ammo, med kits, and fuel to make the trip to Salvation. Marauders and Apocalyptic events make doing this a lot more difficult than it sounds. Plus the more you get wounded, the fewer resources you can hold!

Tom: What is unique about it?
AJ: The wound system – you flip wounds if they go untreated and get some nasty effect. Your inventory space is directly tied to your health. The dynamic of Heroes and Survivors is particularly innovative in my opinion. Heroes have beneficial abilities, but survivors have hindrances.

Tom: That sounds really neat. Very RPG. I like it. Tell me about the designers.
AJ: Mike and Peter are a design team. They have a real passion for games and it comes through in their designs. Together with artist, Venessa (mike’s wife), they make up the design studio – MVP Boardgames.

Tom: Yep. I’m reaching out to them for an interview. Salvation Road is pretty timely what with Mad Max: Fury Road just hitting theaters. How Mad Max is it?

AJ: It is definitely in the same vein and inspired by Mad Max. In all honesty, the timing has worked out just right to launch the game on May 11 just prior to Fury Road hitting theaters. We hope that fans of the movie will give the game a look!

Tom: Do you have a favorite part of Salvation Road?

AJ: My favorite mechanic in Salvation Road is the climatic Travel Phase at the end of the game. Building up resources all game and then finding out if you’ve done enough to make it into Salvation is REALLY exciting.

Tom: That’s cool. Tell me about your artist.

AJ:  Venessa Kelley. Wow what can’t she do? I have had the pleasure of working with some extremely talented artists. Venessa is an excellent communicator which I consider vital. And her talent is extraordinary for both illustration AND graphic design.

Tom: Let’s talk about AJ a minute. What are some of your favorite games?

AJ: Robinson Crusoe is way up on my list right now. I love Descent 2, and I recently played Android, the epic one,  not Netrunner- and just loved it. If folks like the Crossroads mechanic in Dead of Winter, they should try Android because that game did it first.

Tom: I’ve heard good things about Android. I’ll have to try it out. What is the best piece of feedback you’ve received from a playtester on any of your games?

AJ: How could I choose just one? Every piece of feedback is valuable… even when it is not. Chew on that one! I think recognizing your own bias and not letting it get in the way is huge. 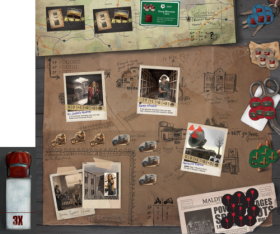 AJ: It is a creative art. It really is like inventing your own creation. And making something fun is, well, fun!

Tom: I totally agree. I need a creative outlet and game design is a unique one. As a publisher: Mechanics or theme? Which is most important?

AJ: FUN. Ok I know that wasn’t a choice, but ultimately people play games for fun. Obviously for me Theme is a very important aspect of what we publish. But the game has to stand tall beyond just its theme. Aren’t the best games the ones that integrate Theme and Mechanics equally well? That is what we strive for.

Tom: There’s been some talk in the community lately about FUN. Interesting. Tell us about a ‘Eureka!’ moment. Was there a moment when you went ‘Yeah, this is a game I want to publish.’?

AJ: At UnPub when I met the designers (of Salvation Road). I still had to evaluate the game beyond that first play, but I loved Michael and Peter’s vision for the game and I could tell we would work well together.

Tom: What designers do you admire?

AJ: I am a big fan of Ignacy from Portal, Bruno Cathala, Kevin Wilson, Richard Launius, Rob Daviau, and many more. 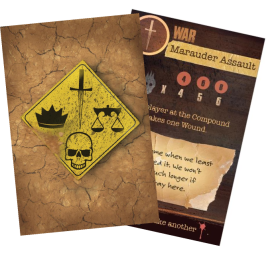 Tom: I like almost everything Cathala does. Launius too. So, how do you decide when a game is done?

AJ: Well as a publisher it is when people are able to buy it off a store shelf, quite simply.

Tom: What are some things that you have learned about playtesting over the years?

AJ: It is laborious, annoying, redundant, not glamorous, and most of all ABSOLUTELY NECESSARY.

Tom: What’s in the queue from designer AJ?

AJ: Hostage Negotiator Abductor packs! Beyond that, most designing I do these days is what most would call development of games I’ve signed.

Tom: Put your publisher hat back on for a minute. What do you look for in a game?

Tom: Do you get a steady stream of submissions?

AJ: I get them here and there. I wouldn’t call it steady.

Tom: What do you dislike the most about being a publisher? 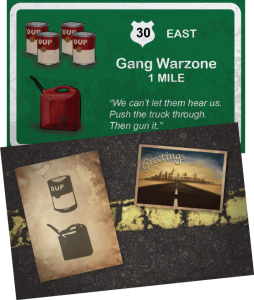 Tom: What is the most rewarding part of being a publisher?

AJ: The money. I’m making a killing! All kidding aside, it is really just about bringing games to life.

Tom: You have signed Gunslinging Ramblers from Jason Slingerland. Tell us about it briefly. (I have Jason on the hook for an interview closer to launch btw.)

AJ: Ramblers is an awesome game that lets you Drink booze, gamble, and have gunfights without ever actually being in real danger. That’s all I will say for now, but look for more info later this year.

Tom: What about it made you go ‘Yeah, I have to have this.”?

AJ: I liked that when I played it, I really felt like I was in a saloon shooting whiskey shots and playing cards with some outlaws across the table. It has card play and dice chucking.

Tom: You’ve also signed Saloon Tycoon from Jason’s co-host on Building The Game, Rob Couch. Tell us about briefly too. (I’ve got Rob too.)

AJ: Yeah this is our newest signee. What an excellent game with a visually stunning presence. Players will love seeing their Saloon develop on the board into a 3d structure. It has simple but engaging game play and people just love it. It was  a real hit at this year’s UnPub.

Tom: If you have a favorite cartoon what is it?

AJ: I grew up on Transformers, so I will go with that.

AJ: Mal hands down. I never was a trekkie, but I’ll be a browncoat as long as I’m still breathing.
Tom: Thanks for joining me once again AJ. It was a blast talking to you.

Readers, You can find Salvation Road right here. Take a look and support it if you can. It looks like a lot of fun.