I’m joined this time by Kevin Brusky of APE Games and Philip duBarry, the designer of Spirits of the Rice Paddy. Rice Paddy has just completed a very successful Kickstarter campaign so I thought I would talk to these guys about this very interesting game. 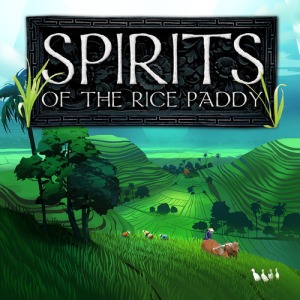 Tom: First, remind everyone who you are.

Tom:Kevin, talk a minute about Ape Games. What it is? Who you are? What are your games?

Kevin: I’m the president of APE Games, publisher of such games as duck! duck! GO!, Order of the Stick, Kill the Overlord, Island Siege and RARRR!! It appears I like games with exclamation points in the title. I’ll need to rein that in some. I’ve been publishing games since 1997.

Tom: Now let’s talk about Rice Paddy. Philip, where did the idea come from?

Philip: I got the idea as I was reading through a Malcolm Gladwell (I think) book. He described the meticulous processes involved in creating and maintaining a rice paddy, activities that inform the work and life experiences of millions of people throughout the world. I love the idea of farming as a game theme (I’m a big Agricola fan), so I immediately tried to explore ways to make rice farming into a heavier eurogame.

Tom: Talk about the game itself. How does it play? What kind of feedback you have gotten?

Philip: The goal of the game is to produce the most rice over the seven rounds with a little help from the spirit world. The game features two card drafts (to get your six spirit cards with special abilities), and each round requires successful allocation of workers (not really worker-placement). Players will also usually have livestock (oxen for heavy-lifting and ducks for eating pests and fertilizing) to allocate. In addition to this, players must manage the flow of water (based on a Rain Card each round) from 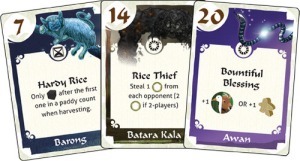 the first player (determined by spirit card number) to the last player.

Your rice paddies need to be flooded when they get planted and when they grow. However, they need the water to be released for weed-pulling, pest-eating, fertilizing, and harvesting. The bigger paddies you have, the bigger yield, but the harder it is to manage properly. The winner is the player who best manages access to water with finding good spirit cards that harmonize and allow for grabbing achievement tiles and producing lots of rice by the end.

Tom: It sounds like my kind of game. The worker allocation part intrigues me since you say it’s not worker placement. Is it more like action selection? How would you describe it?

Philip: It’s more like spending action points. You start with 10 workers and get more as the game progresses. Building a wall takes 3, pulling weeds is 1 per hex, planting is 1, harvesting is 2. Working that puzzle is a big part of the game. Often you just can’t quite do everything you need to do (which is how a game should be).

Tom: I’m gonna like this game! Action points is what I was thinking. Kevin, what made you want to sign Rice Paddy? How is it unique?

Kevin: One of my developers, Shawn, found the game at a con through a friend, back in 2012. We played one of our Friday night sessions at the local pizza restaurant, and I loved it immediately. My hunch was right – after playing with 2-3 other groups that loved the game, I decided to sign it. 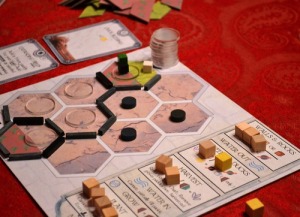 It’s definitely the heaviest strategy game that I’ve ever signed, and my first Euro-style game. So what attracted me to it? I love the balance between Spirit card power and turn order. Turn order is so critically important in the game, yet the powerful Spirit cards are SOO nice. Unfortunately, the more powerful the Spirit card, the later you end up in turn order, and the later you are in turn order, the higher the chance you won’t get water.

Tom: The Kickstarter campaign went super great. Talk a bit about it.

Philip: I figured out that this is the seventh Kickstarter I’ve been involved with. This one has done the best, beating the previous high pledge amount of just under $40K (Fidelitas). I continue to be surprised by how excited people are about the game. My wife is just floored by it–she doesn’t enjoy heavier games, particularly obscure ones about farming! 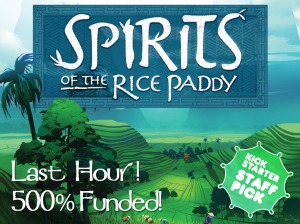 Philip: It’s been pretty crazy. I’ve not really had to do most of the work (except on Skyway Robbery), but it’s still been a bit stressful at times. The Fidelitas and Spirits campaigns are so much more fun than the ones you have to drag over the line (or the ones that just don’t make it).

Tom: Kevin, speaking of the Kickstarter campaign, you have an add-on of another game, Arcadia. It’s an amusement park building / management game. It reminds me of Roller Coaster Tycoon which I like a lot. And thank you for sending me the rules and for the review copy that’s on the way.  I’m VERY interested in it. So talk about Arcadia.

Kevin: Arcadia was designed by Phil Chase and Greg Bush. They showed it to me years ago at Gen Con as a fantasy fairy village building game. From there we re-themed it to a game of Mars colonization. Since this game definitely has potential as a family game, I wanted to theme to be more attractive to family audiences, hence the theme park.

Keeping with the desire to make the game family-friendly, I contracted Kim Smith (tuckedaway.com), a children’s book illustrator. Her art was absolutely perfect for the game.

Arcadia is a game of collecting symbols from different Jobs cards and trading them in to build theme park attractions in four different categories – rides, midway, shows and food. There are four levels for each type of attraction, and players must build the previous level before building the next on top of it. Attractions provide victory points, but many also provide some abilities.

The game is played over four seasons. At the end, the player with the most victory points wins!

Tom: Daniel Solis is a friend of mine. How did you decide on him as the graphic designer on Rice Paddy?

Kevin: Good question! I don’t actually remember how I found Daniel, but he’s an absolutely brilliant graphic designer, a well as a pretty decent game designer. And if that’s not enough to keep him busy, he runs a fantastic design and graphic design blog at smartplaygames.blogspot.com.

Tom: What else would you like to say about Spirits of the Rice Paddy?

Kevin: The pre-production version of the game has reviewed really well, and the Kickstarter was extremely successful. I knew it was a special game, and I’m glad that others are having the same experience with it.

Tom: Philip, what’s next from you?

Philip: In just a few more weeks, my next Kickstarter will be launching. This time it will be with Tasty Minstrel as we seek to fund my new customizable micro-game, Eminent Domain: Battlecruisers.

Tom: Yes, I remember you mentioning it on our last interview. We’re gonna talk about Battlecruisers pretty soon.

Tom: Kevin, what is APE Games working on?

Kevin: Man, I’m so busy. I’ve got Mr. Cuddington working on art for my next TWO games – a pirate game by Andrew Federspiel (Knee Jerk), and a game about paleontology during the Bone Wars in the late 1800’s by Scott Almes (Tiny Epic Galaxies).

I’m also finishing up a hilarious card game called “This Game is S.T.U.P.I.D.” STUPID stands for Space Time Universal Police Investigation Division. This game was a finalist in the 2014 ION Awards, submitted by a group of students calling themselves Marshmallow Canoe.

And honestly, that’s the tip of the iceberg.

Talk to me in another month or so, and I’ll give you details on some or all of these titles.

Tom: I would  definitely talk to you about all those games. And if you need any playtesters, I’m available. Any final words from you all?

Kevin & Philip: Thanks for the interview – it’s been a lot of fun!

Tom: Thank you both for being my guests. Philip, I’ll send you some questions about Battlecruisers real soon. Kevin, let’s do an interview about Arcadia when you are ready. I am very interested in it.

Thank you once again readers. I hope you are having as much fun reading these interviews as we had doing them. There are more on the way – Scott Almes talking about Best Treehouse Ever, Grant Rodiek and Joshua Buergel about Hocus Poker and a few more. Leave a comment below if you don’t mind.