It’s a tense situation. A terrorist has taken control of the opera. Hundreds of people are held under the threat of being blown to bits. The police have surrounded the complex and are trying to figure out how free the hostages. They wait desperately for the one person who can save those people. Enter the Hostage Negotiator!

Tom: Hi AJ. We talked not too long ago about what Van Ryder Games is up to but I wanted to bring you back on to focus on Hostage Negotiator. So remind everyone what HN is about.

AJ: The game puts you in the role of a Hostage Negotiator that needs to negotiate with a Hostage Taker (or Abductor as we call it) to successfully save the hostages. The game is for solitaire play and plays in under half an hour. It really simulates that tension filled situation quite nicely.

Tom: I’ve played an early prototype. Man, you are right. This game really delivers the tension. I like that a lot. Where did the concept come from?

AJ: From my crazy brain. I was brainstorming underutilized themes and Hostage Negotiation came to mind. I couldn’t believe there wasn’t anything out there and then I realized how sensitive the subject is and that who would want to play as a Hostage Taker? But as a solitaire game no one has to, so it fit perfectly.

Tom: I spoke about the early pnp of the game. About a year ago. It was really fun and pretty well baked at that time. What’s changed since then?

AJ: Mostly balance tweeks, but I’m not sure if Pivotal events existed then or the additional abductors. And of course the artwork has all been updated since then.

Tom: Nope. Those are new. I can’t wait to see what they add.  What kind of feedback have you gotten so far?

AJ: The reception has been really great. People just seem to really enjoy the game. I am very excited and confident that Hostage Negotiator will take the solitaire gaming community by storm.

Tom: The game looks pretty slick. Who is the artist? Who is the graphic designer?

AJ: Kristi Kirisberg did all of the artwork including the brilliant cover. She also did most of the graphic design, but my friend Chase Williams has also done some as well.

Tom: How’s the Kickstarter campaign going? Where do we stand right now?

AJ: We just passed $15k which means we’ll get meeple hostages so that is pretty exciting. There is still 20 days or so left so there is still time to take that even further!

Tom: I like the ‘Instant Rewards’ idea. That is sweet. Where that come from?

AJ: Well that was something I thought up. You know I was thinking that as a backer it can sometime feel like a project dangles the proverbial carrot so to speak. Wouldn’t it 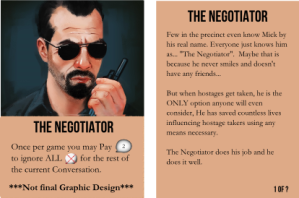 be cool to get some extras without having to badger my friends on twitter or Facebook to back the game? So I thought let’s just do it, let’s just give them something more just for being there. And so the instant reward was born.

Tom: Talk about the rewards a bit.

AJ: Mostly it is just the game at each level, but there are bulk levels and there are levels to add other Van Ryder Games products. Also there are 4 Abductor packs that can be added on that w 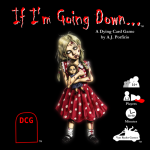 (Update #2: Every game will now come with the Negotiator pack!)

Tom: I recommend both Tessen and If I’m Going Down…. Both are very fun games. The Comments section of the KS is very active. What’s going on there?

AJ: Just friends talking. We are all really excited about the project and game, so we share with one another. Backers have been really responsive and engaged which has been great!

Tom: Who will be producing HN?

AJ: Quality Playing Cards. They did a great job on Tessen and I really like what they do with small box games, so it is a natural fit for them to manufacture Hostage Negotiator.

Tom: When is your hoped for delivery date estimate?

AJ: Well I’ve put February 2015 on the KS delivery estimate. So hopefully we can meet or beat that.

Tom: Anything to tease?

AJ: Not at this time.

Update #3 – I forgot to let AJ talk about the Abductor packs. These are add-on expansions for Hostage Negotiator. What is an Abductor pack? At set intervals following the official release of the game, we will release Abductor packs that will serve to add more variety to the game and provide new challenges. Abductor packs will contain a new Abductor with his/her own Demands and other game content such as new Terror Cards or other surprises. Each Abductor pack will add 15 (or so) cards to your Hostage Negotiator experience. These packs are Add-Ons that are purchased separately for $5 each or $15 for the set. They do not come in the base game. AND the MONEY BACK GUARANTEE.

You can find out more about that on the KS campaign site.

Thanks AJ. It was great talking to you again.

I have to say this game really delivers. There are few games that build real tension. This one does it. I very highly recommend Hostage Negotiator. Do yourself a favor and back it. You only have a few days left. Go there right NOW!

I’ll leave you with the explanation of the title of the interview. I always hear the Priceline theme song/tagline and put in the game title.   Hostage (pause) Negotiator! 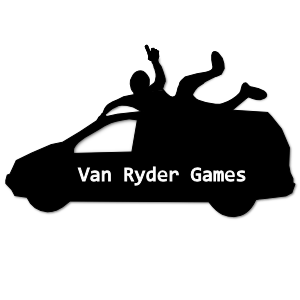