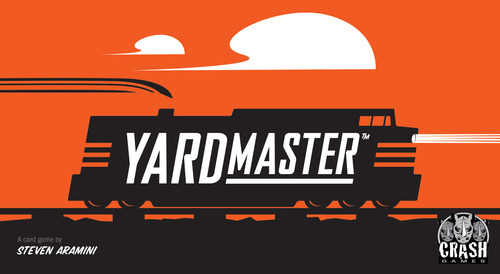 Crash Games’ latest, Yardmaster, is a card game in which you are working in a freight yard trying to load your train first.

My initial impression upon opening the box was ‘neat’. It’s a card game. The cards are well done with a nice linen finish. The art is very minimalistic but sufficient. The color scheme is somewhat muted though. The iconography is clear and self-explanatory. The deck is divided into several card types: cargo – livestock, timber, oil, coal each in a different color, railcards – colors and type to match its cargo (each railcar also has a purchase/victory point value), 4 engine cards, and bonus cards. The game also comes with 4 exchange tokens and one Yardmaster token.

As this was a prototype, the rules are on a single sheet of paper, front and back. The rules are well written and clearly understood with good examples and illustrations.

Setting up the game is easy and quick. The rules do a good job of laying set up out.

Yardmaster plays easily. On a turn you may take two of three actions. You may draw two cards from the cargo deck. You may buy one railcar from the arrival yard. Or you may swap their current exchange token for another. Let’s look at each of these actions.

First, draw cargo cards. You can draw two per turn. The cargo cards are used to purchase railcars to add to a player’s train. And railcars equal points so you want to buy them.

The next action you can take is purchase a railcar. As I said you have to do this to get victory points. Each railcar has a cargo type and a number on it. You need that number of the matching cargo type to purchase the card. Railcars are placed behind your engine, this is called loading the car, in a line to make up your train. But there is a special restriction to this placement. The railcar must match the color or value of the preceding car. If you are not able to place the railcar when purchased it goes into your sorting yard. It will wait there until you are able to load it. Should it be able to be loaded on a subsequent turn you may do so as a free action.

The final action you may take is to swap your exchange token for another. There is an exchange tok

en of each cargo type and these tokens enable you to exchange two cargo cards of any type for one of your choosing. Each player receives one of these tokens during set up.

Let me talk about the Bonus cards now. These are part of the cargo deck and may be drawn as cargo cards. Bonus cards give you special abilities. These actions are ‘draw three cargo cards, ‘pay one less’’, ‘steal one cargo card’, and ‘sweep the yard’.  Additionally these cards may be played as a free action.

Play continues until the point goal is reached. There are different point goals depending on the number of players.

What Do I Think Of Yardmaster?

As a light, casual card game Yardmaster hits the mark. It is easy to explain with well written rules and easy set up. The game has enough there to make a good, average filler for gamers. The game is tight and plays as expected. It is accessible to a wide audience. The components are well done. Crash Games has a good, solid entry into the family games market.

Who Will Yardmaster Appeal To?

This is very much a light, family targeted game. It is not heavy nor thinky. It does have some weight and a few decisions like when to play a bonus card or purchase a certain cargo card but the decisions are not hard ones. This is a game you can play while having a conversation or in a pub.

As for gamers, Yardmaster is not too much different from many of other card games out. It works well as a filler but that’s about it. But as a filler it does its job well. It is a very well crafted game and once everyone knows how to play, it plays quickly – easily in 15 minutes. And is quite enjoyable.

I only have a couple of small suggestions for Yardmaster. First, decrease the point goals a bit. They are a little too high in my opinion. This can lead to overly long games.

Second, add a second layer of complexity or a variant with more depth. I’d like to see more bonus cards. Either more of the same or some different ones that add some increased player interaction.

I’d add some iconography to the bonus cards to make them language independent.

We liked Yardmaster. My family picked it up quickly and enjoyed the game play. The game is smooth and  well designed. I believe Crash Games has a solid game on its hands that has a large audience appeal. So pick up a copy and see if you can be the big yard hog.

Yardmaster was a recent 2014 Ion Award winner in the ‘light games’ category. Crash Games will launch Yardmaster on Kickstarter later this year. You can get more information about Yardmaster on the Crash Games site here and on the BGG page.

I would like to thank Patrick Nickell of Crash Games for providing a review copy of the game.