Note: This review is of a prototype of King’s Forge provided by Game Salute for this review.

King’s Forge is designed by Nick Sibicky and published by Game Salute. It is a resource management and dice rolling game  of crafting or making items for your king.  To be crafted, an item needs a certain combination of dice (both color and number). You acquire these dice by spending them. Wait, what?! There’s the beauty of the game.

King’s Forge comes with a lot of components, especially dice, 91 in total. Ninety one dice in six colors. These dice represent the resources needed to craft the items the king is seeking. There are also fifty-three cards made up of craft item cards, Gather cards, Black Market cards, storage cards, and a player marker card. There are also a few tokens.

The game play is straight forward. It is played in rounds and each round is divided into phases. These phases are Gather, Crafting, and Clean-up. In the Gather phase, you may either take a Gather card, discard a Gather card to claim a Black Market card, or pass.

To claim a Gather card you take it and place the dice indicated on the card. Then you perform the action on the card. This may be taking new dice from the stock or some other action.  These dice are locked in place and are not available for crafting in the Crafting phase.

You could choose to take a Black Market Action in this phase. To do this you place the indicated dice on the action on the card that you wish to take. These dice are lost at the end of the turn.

The Crafting Phase – in this part of the game you may use your remaining dice to make one of the displayed items. To do this you roll all your unused dice and match the rolled dice by value and color to the dice on the item you wish to craft. If you have cards or tokens that allow you modify the dice you can use them now.  If you are able to match you take that card. It counts as one of the four items you need to craft to win the game. One interesting thing about the Crafting phase is stealing. Once you gain a Craft card it’s not secure until the end of the Craft phase. That means it can be stolen by another player if that player allocate their dice that match your dice with at least one higher die. After all players have had a chance to craft that phase is complete.

Now comes the Clean-Up phase. In this phase you now claim any crafted items. You now clear your Gather cards and return the dice not on an ‘X’ to your Storage card. Dice on an ‘X’ are placed in the dice stock area. The Black Market cards are cleared of dice and  are placed into the dice stock area. The start player card is passed and that player collects, shuffles, and places the 11 Gather cards face-down in the center of the play area.

The first player to craft four items wins the game.

What Do I Think About King’s Forge?

Now remember this is a prototype that I’m evaluating.  Keep that in mind.

Nick Sibicky has designed a pretty good game. There’s a lot to like about this game. The theme is attractive. The idea of competing artisans vying for the king’s favor fits well. I liked the use of dice as a resource. The decisions of whether you will use them for to get Gather cards, enabling you to get more/different dice, or save them for crafting are tough at times. And you know me. I really like hard decisions. There is a good variety of items to craft. The game is a dice fest which is fun. There can be some good ‘take that’ and confrontation with the stealing and potential to devastate other players by taking the very items they are attempting to craft.

Now there are a couple of things that turned me off about the game. First, the game can go long. Our three player game took about an hour but it seemed longer. The other  four guys in the group were playing a second copy of the game. Their game lasted almost 2 hours. That seems really long. The game can be a bit swingy. My son lead for most of the game up until the very last few turns when the other guy in our game was lucky enough to get favorable dice on a couple of turns. It looked like he had gotten his engine finally running. He was able to craft two items in his turn. My son was next and he rolled well and had enough dice of the right color and value to steal one of the crafted items to win the game. I was never able to get enough of the correct dice at the right time to craft any items. So the luck factor is very high.

We all concluded that it would be nice if there were more Gather cards and Items available. The limited choices caused some turns to be empty, unable to do anything.

All in all we liked the game a lot but all felt like it was missing something, like it wasn’t quite done. It has a lot of potential.

We feed our ideas and thoughts back to the publisher and I’m quite sure that they are being addressed.

But with that being said I like King’s Forge. It was fun and interesting.

– diceophiles. It has a lot of dice.

– gamers who like a good dose of luck in their games.

If you fall into any of those categories I would recommend King’s Forge to you.

King’s Forge has funded on Kickstarter. It will be published AND there will be some sweet bonuses like more craft cards, special dice, and upgraded tokens. If you are interested in supporting it you’ll find it right here. There are only three days left so you better hurry. 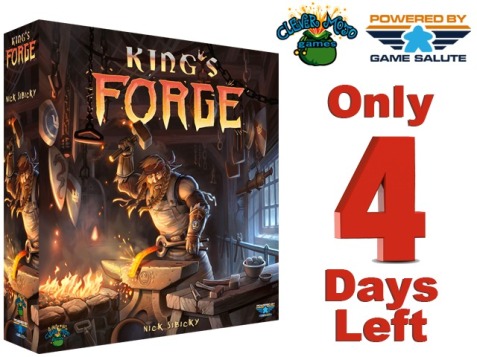