This time I’m previewing Magnum Opus, the new game from Ian Stedman and Clever Mojo Games and powered by Game Salute. This review is based on a prototype of the game. Please take that under consideration when reading this review.

Abstract: Magnum Opus is a deck-building and set collection game about alchemists racing to discover the secret to creating the Philosopher’s Stone. It has a neat matrix of cards that hides the clues to creating the much sought after Stone.

Components – This is a card game. It has a lot of cards comprising multiple decks. There are green topped Mystic Components, blue topped Alchemical Components, and orange topped Trade Skill cards. You’ll also have Research cards, Clue cards, and Discovery cards. The cards in the prototype are well made and the art is nice. There are also Experience and Coin tokens and one eight sided die.

Game Play – The object of the game is to collect components needed to transmute components into various other items to help you in your quest for the Philosopher’s Stone.

I’ll mention the set up briefly because it is essential to understand the game. The major unique mechanism of the Magnum Opus is the Discovery Matrix. This matrix is made up of the Discovery cards and Research. These cards set up in a 4×4 matrix that consists of one Research card under one Discovery card. Outside of the matrix are the Mystical and Alchemical cards, each on one of the axes of the matrix. The picture below shows what it looks like. 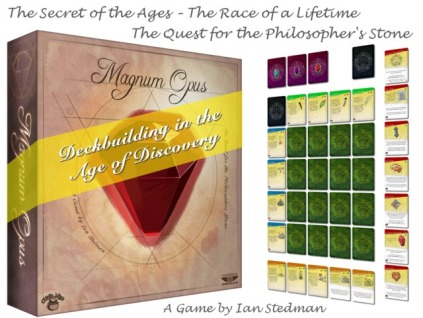 After an extensive set up, the game proceeds through three phases – Trade Skill, Table, and Experimental. In the Trade Skills phase, players play cards to earn coins or more cards. In the Table phase, they place components needed for Transmutations on their tableau or lab bench. In the Experimental phase players attempt Transmutations, play other Action cards, buy and sell components, or draw cards.

Magnum Opus is a new twist on deck-building. It’s deck-building mechanic is one part of the engine that drives the game. But it’s not the focus. At its core, Magnum Opus is a set collection game. It’s the collecting of the components to discover the Clues that is the driving force of the game. It’s a goal based game as opposed to a points based game. This race to discover the secret combinations is what is unique about Magnum Opus.

Now there are a couple of things that need some work that may be related to this being a prototype. Some of the iconography is inconsistent or not explained. The rules while doing a good job of explaining how to play the game, they leave some key information out or are unclear at some points. Example: In the Trade Skill phase players may choose to draw cards. But the rules do not tell you where to draw from. In one play we mis-played this by drawing from the Research and Trade Skills decks. Clever Mojo has posted a rules set on the Kickstarter page. I checked the current rules .pdf and it seems that a couple of these issues have been addressed. The set up is extensive and long. And the game does seem to run a bit long.

Who Will Like This Game: Players who like deck building games, people who like set collection games, gamers who enjoy hidden information and discovery of clues

Who Should Avoid This Game: Players who do not like extensive set up, people who despise deck building games, new gamers and non-gamers

All in all though I like Magnum Opus. I think the Discovery matrix is pretty cool and sets the game apart. I see a lot of potential in the game. The Kickstarter for Magnum Opus is currently active and has funded so it will be produced. You can pick up a copy for $35. And that includes several stretch goals. Clever Mojo Games has taken a page out of the Stonemaier Games book by offering a 30 day money back guarantee. You should check out the Kickstarter campaign and see if Magnum Opus is for you.

One thought on “Under The Microscope – Magnum Opus by Ian Stedman”