Tom: Tell us about yourself.

Doug: I’ve lived in the South most of my life, am married, and enjoy playing my banjo and collecting record albums. I would like to travel more. Generally speaking, I have a very optimistic outlook on life. “Where there’s a will, there’s a way” is an attitude that has served me well.

Tom: Meridae Games. Give us some info on it.

Doug: Designing games has been an interest and hobby of mine for several years. Primarily, I formed Meridae Games to self-publish Garden Dice, but there will be other games that come after. At some point, I may try to recruit other designers to join me, presumably after I’ve done at least one more on my own.

Tom: Ok, so now for Garden Dice. How did it come about?

Doug: The initial ideas for Garden Dice came to me while making a seven hour drive to visit my sister in late 2009. I had just received Carson City as a gift and as I drove, I wondered if the initial board preparation (rolling dice to place mountain tiles) might not be turned into a game itself. From there, the ideas just seemed to flow over the next few hours; I’d never experienced anything like it.

Tom: Did anything change from initial concept to final product?

Doug: The core mechanics of rolling dice to buy, plant, water, and harvest vegetable tiles using dice haven’t changed since that day in December 2009. The birds and rabbits were there as well. There were many minor tweaks over the next couple of years, but probably the single most important change was not mechanism or theme, but my choice of an artist and graphic designer. I briefly worked with a couple of other artists but after seeing Belfort in late 2011, I decided to try contacting Josh Cappel and I couldn’t be happier that I did (and that he agreed!). Josh was also instrumental in rewriting the rules in much friendlier terms – my original draft was very, very dry by comparison.

Tom: Yeah, I like Josh’s work.  I need to get him on as a guest.  Why did you choose to self-publish?

Doug: I chose to self-publish for a few reasons but chief among them were maintaining creative control and getting the game to market in a reasonable amount of time. Plus, I like a challenge. 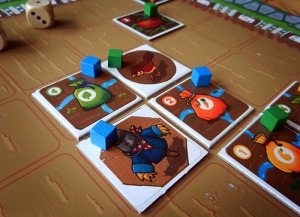 Tom: What is unique about Garden Dice?

Doug: To me, what makes Garden Dice unique is its particular combination of theme, mechanisms, artwork, and high quality production: the whole is greater than the sum of the parts.

Tom: Did you have any problems with production?

Doug: I am pleased to say I haven’t had any problems with production so far, and don’t anticipate any. Panda has done a great job not only with the quality of their work but also with helping me learn the publishing and manufacturing process; Chris and Richard are great people.

Tom: How do you go about designing a game? What comes first, mechanisms or theme?

Doug: Either can come first in the design process, but both are important. For Garden Dice, the mechanisms came first but the theme revealed itself so quickly that they played off each other in my mind from the very beginning. For that game, it was the ideal situation. It was like having two muses at once. Another game that I’ve essentially finished is all mechanism at the moment – I have yet to decide on a theme. I am not a fan of abstracts, but the game is so far along that theme will be secondary. Yet a third started with theme and I’m now working on mechanisms that will mesh well with it.

Tom: So some of each.  That usually happens with me. So,what is your favorite mechanism?

Doug: I like many different mechanisms, but the auction is the one I like most. Power Grid and Chicago Express are my two favorite games, but there are others: Goa, Princes of Florence, and Tinners’ Trail. I like auctions because they foster intense player interaction and present delightful mental and psychological challenges, not to mention the physiological responses they can produce, at least in me.

Tom: I really like Goa. I want the new version a lot. Princes is such a great game. I need to get it too. I’ve not played Power Grid, Tinner’s Trail, or Chicago Express. Yet. While we are on game design, what is the hardest part of designing a game?

Doug: Power Grid isn’t for everyone, as I’m sure Chris Norton will tell you :p Chicago Express is great game when played with experienced opponents, game state changes constantly. It’s a stock holding game in case you’re not familiar with it.This may sound trite, but for me, the single hardest lesson I learned is not letting perfectionism become a roadblock to success. Truthfully, I could have endlessly tweaked Garden Dice and never seen it published. There is a fine line, but I think I’ve learned about where it is.

Tom: Playtesting seems to be a mixed bag. While absolutely necessary, it can be slow and difficult. What is your playtesting nightmare? Do you have a regular group that you playtest with?

Doug: To me, the biggest challenge with playtesting is trying the many permutations of rules variations to see what combinations work best together, and to test them over and over. I’m quite sure I’ve played Garden Dice over two hundred times because of this. I am lucky enough to have a regular group that is willing to playtest and offer suggestions and feedback, but I think I sometimes drove them crazy with all my rules tweaks. The biggest nightmare was one blind playtesting session where the players weren’t given enough time to review the rules ahead of time – literally the only thing I learned that day.

Tom: Man, that does sound harsh.  Here is the first of my standard questions: What are some aspects of a good player?

Doug: Meaningful play is absolutely vital, but it should be reasonably swift – the proverbial analysis paralysis will kill any chance of enjoyment for everyone else. Social skills are absolutely essential.

Tom: That’s a good point.  We will revisit that in a future post (hint, hint).  Second – in your opinion what makes a game great?

Doug: Sometimes it is a game with tough, meaningful decisions. Sometimes it is one that encourages player interaction. Above all, a great board game is one that rewards players with a memorable experience, which can be found in many forms, and leaves them wanting more.

Tom: I agree wholly with you on those points.  I like games that haunt me.  Whose work in the industry do you admire the most?

Doug: My favorite game designer is Martin Wallace. His designs are very complex, sometimes overly so, but I absolutely love them. Art-wise, it’d definitely have to be Josh. Behind the scenes, the award goes to Richard Lee of Panda. He really has been so much fun to work with and I’m so glad I got to meet him at Gen Con this year. Favorite podcasters are Mark Johnson and Chris and Cherilyn. For small publisher, I am going with Two Lanterns Games, publisher of Morels. I met Brent and his wife Kaleen at Gen Con and they are a delightful couple whom I very much hope to meet again.

Tom: Wow.  That reminds me that I need to start taking note of artists.  Podcast wise I like Garrett’s Games and Geekiness and GamerChris as well as those you mentioned.  What are you currently playing?

Doug: Most recently, I’ve been playing a bit of Caylus, Rise of Empires, and Age of Industry. I’ve also been enjoying Crokinole and Morels with my wife.

Tom: I really need to get a Crokinole board.  What is next for you? What are you working on?

Doug: First, I’ll be working on the previously announced card expansion for Garden Dice. After that, I want to finish the card game I began designing before Garden Dice. It’s very close to being done, a bit too long and in need of a theme. You will definitely hear about it in 2013.

Tom: I can’t wait to see what Meridae will be releasing next.  Are there any links or sites you want to direct us to?

Doug: Please visit www.meridaegames.com for more information on Garden Dice; I will be launching an online store there in the next few weeks, but players will also be able to purchase the game through their FLGS beginning in November.

Tom:  Doug, it was awesome talking with you.  I’m looking forward to playing Garden Dice again and to your new projects.  I’ll keep an eye open for them and I hope you can come back and talk about them.

Thanks for joining me again for another fantastic interview here at Go Forth And Game.  As always, we can continue the conversation if you leave a comment, email me (goforthandgame AT gmail DOT com), or tweet me (@tomgurg).  I really enjoy hearing from you.

Go Forth and Game,