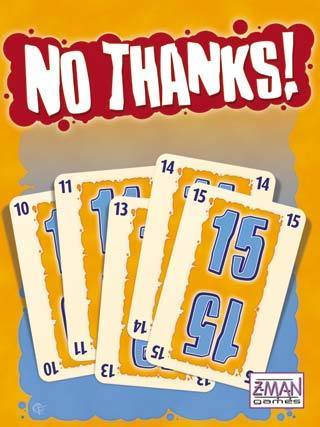 Review: No Thanks!
Designed by Thorston Gimmler
Published in English by Z-Man Games

The Basics:
No Thanks! is a card game in which players pay a chip not to take a card from the middle of the play area. Each card has a certain amount of points on it. By taking the cards from the middle players add points to their ‘hand’. The idea of the game is to have the fewest points at the end of the game. So you must pay to keep your point total low.

Components:
The game consists of 33 cards numbered 3 through 35 and 55 playing chips. That’s it.
Oh, and a rules sheet.

Setup:
Deal 11 chips to each player. Shuffle the cards. Deal 24 cards face down to the middle of the play area. The remaining cards are not used this round and are placed back in the box.

So How Do You Play No Thanks!?
The first player turns over the top card of the deck. He has the option to either take that card or pay a chip not to take it. If he chooses not to take it, he places a chip next to the card and play moves to the next player. This player has the same options – take the card AND the chip or pay a chip not to take it. Play continues until someone decides to take the card. This player takes the card and all the accumulated chips. He then flips another card from the deck face up. He now has the same options – take it or pay. Taken cards are placed in front of the player. Taken chips are added to that player’s pool. One twist to play is that consecutive sequences of cards score only the lowest card in the sequence. Also if a player has no chips he must take the card in play. Play continues until all cards are taken. Players then calculate their final score by adding up the points on the single cards and then adding the points from the lowest card in each sequence. Then they subtract a point for each chip they still have.

So How Do I Like No Thanks!
This is a very fun and surprising game. The rules are so simple yet the strategy involved with keeping your point total low, trying to get sequences, and keeping some chips makes for hard decisions. I like this. The fact that you do not use all the cards ensures that you can’t card count as you never know which cards are in the deck and which are in the box out of play. This is a good mechanic. There is a take that element in the game that is fun. You can drive play around to the guy who has no chips left, forcing him to take the card in play. You can take a card to keep it from someone need it for a sequence. You can take a card just to keep the next players from getting needed chips. All of these tactics come into play to add fun.
My group was very surprised by this quick filler. It has unseen strategy and tons of fun. It is a regular filler at Hypermind and one I will be teaching at work soon. 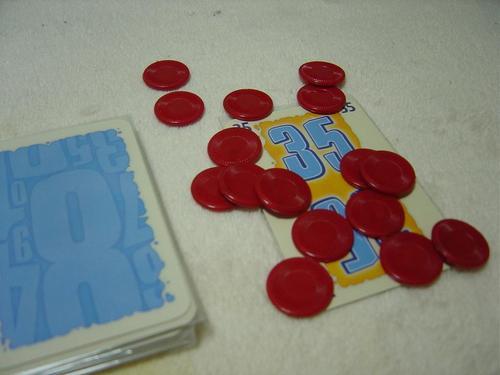