I’m happy to be joined by my good friend Chris Norwood. Chris is the mind behind GamerChris.com, one of the best gaming blogs on the internet. Chris is an avid gamer and advocate for gaming. He is the organizer of The Hypermind Boardgamers, our local FPLGS game group. Welcome to Go Forth And Game, Chris.

1. Gamerchris.com is what you are best known for these days.  Tell us about how it came to be and your vision for it.

First of all, from the moment I started the Hypermind Boardgamers, I’ve been keeping a record of our game nights online.  Originally, I wrote a series of Geeklists over at BGG, but that always involved editing and posting pictures in advance to the actual game galleries, because back then, there were no individual profile galleries .  And that worked pretty well until my daughter was born and I completely ran out of time.

And somewhere in there, I kind of got to liking having an “online voice” and wanted a place that I could talk about things other than just our weekly game nights.  The final push I needed was an episode of The Metagamers (possibly the best boardgame podcast ever made, unfortunately now pod-faded) about luck and chaos in gaming.  I wanted to respond, but my comments were too long and involved for just a comment on their site or anything, so I went ahead and pulled the trigger on the site, which I’d been thinking about for a while.  From the get-go, I bought the gamerchris.com domain from GoDaddy and used it to host and manage the site.

Eventually, I decided to fold the weekly reports into gamerchris.com as well, and now it’s where you’ll find pretty much everything that I do online.  I’ve had a couple of articles on Boardgame News and contribute to the Thru-the-Portal ezine, but those are strictly sideline projects to my site.

As far as my “vision” for gamerchris.com goes, that’s hard to say.  There’s definitely an element of wanting it to be a community-building thing for the Hypermind Boardgamers.  And of course, I love the idea of having some impact on the larger gaming community out there.  The best thing I’ve ever done on the site was to write my Boardgame Basics series aimed at people new to the hobby, and the Introduction to Modern Boardgames article is consistently one of the most read things on my site.  But more than anything else, I write the blog for myself; to have a voice in the hobby that I love so much.  And since that’s my primary motivation, I don’t care so much about aggressively trying to grow it or monetize it.  It’s a labor of love, not a business venture.

2. You ‘started’ and organize The Hypermind Boardgamers.  How did this come about and tell us about the group?

2)  Let me start with a brief rundown of my gaming history.  I’ve been a diehard roleplayer since I was about 9 years old.  All through middle school and high school, I played D&D, Vampire, DC Heroes, Rifts, and a ton of other RPGS.  Then in college, I got into the CCG craze with Magic and (my favorite) the Babylon 5 CCG.  Eventually, I dabbled again with some 3/3.5 edition D&D and got into the D&D collectible minis game.  Both at the All Fun & Games store in Apex and at Hypermind (after I finally discovered it), I participated in their DDM communities, but also started to get more and more interested in the plethora of gorgeous modern boardgames that both stores offered.

And something amazing started to happen at home as well, because for the first time, my wife Gwen actually showed some interest in playing games with me.  First Ticket to Ride and then Settlers of Catan, and eventually things like Pillars of the Earth and other games, and her interest fueled me buying and exploring more and more of these games.  So when the DDM group completely disintegrated in late 2006, I started talking to Denise Shepherd (the owner of Hypermind) about starting a regular game night to play all of these new boardgames that I’d been buying.

We started on January 16, 2007 and, predictably, played The Settlers of Catan.  In addition to Alton and Mark (who had been playing Pirates of the Spanish Main on Tuesdays before that), I also looked on BGG and found a couple of other local gamers (Chip and Ian) and invited them as well.  It went over well, and we’ve been going strong ever since.  Chris Ingersoll came to our third week, and he hasn’t missed a single week since, and Gwen joined us most evenings until we got into the fertility treatments to have Samantha.

We started our Game of the Month! program in April 2007, and have had celebrations on all three of our anniversaries so far.  But for the most part, I don’t actually have to do much “organizing” of the group any more.  We usually have somewhere between one or two dozen people each week, and we have up to four tables of games running most of the time.  People come from as far away as about 40 or 50 miles, and we play until usually about midnight every week.

More than anything else, though, I just think that we’ve put together a really fantastic group of people to play with.  They are good natured, friendly, open to newcomers, willing to teach and learn new games, play relatively quickly, and like to have fun.  And with all honesty, I’d say that my game night friends are now some of my best friends in the world.

3.  What makes a good player, for each boardgames and rpg’s?

Good players are, first and foremost, people who want to have fun.  But they can’t just try to have fun at the expense of the other players, because we are all responsible for making sure that everyone at the table is having fun.  And you know, I could get into a lot of other details, but that’s really the heart of it.  As long as you come into a game looking to have a good time and make sure that everyone else does the same, then you’re probably a good player.

4)  My ideas about what makes a good game have definitely changed a lot over the last few years.  And the way that I’d describe my current “big picture” about games is that system matters.  The rules of a game need to support your fun.  It’s not good enough to just have an interesting situation or theme and then expect the players to run with it and make up their own fun.  A game should be well-designed and provide the system and structure to enhance and empower the things you want to do.

Specifically for boardgames, I want mechanics that work and are interesting.  I enjoy games with multiple viable strategies or paths to victory, where I can explore my options and try out different approaches to play.  And I also like games where you have to be flexible and respond to challenges thrown at you either by the game or the other players.  I like nice theme in a game, but at the same time, I am no longer willing to put up with sloppy, clunky games where you’re expected to deal with things that don’t quite work just because they spent so much time working on (or paying for) the theme.  But in the end, I’m pretty much a game slut.  I’ll try any kind of game (as long as I’ve heard decent things about it), and I like to try and find the right game for any crowd that I’m in.

For RPG’s, my tastes are currently very much in the “indie”/story game category.  I’ve played traditional RPG’s for most of my life, and had fun with most of them.  But the experience that you get from them tends to be very one-dimensional (fight things, and usually take their stuff!), unless you disregard the system completely and just free-play in the “world” that the game sells you (in which case, you’re not really playing that game anymore).

Story games, on the other hand, tend to actually provide mechanical support for the story that you want to tell.  And there’s so much innovation and exploration going on there that it really stimulates my “gamer” side, which really likes to see and explore all the new systems and mechanics.

5)  I’ve actually come into the whole indie RPG world pretty recently, so I missed all the glory days of the Forge and all the early thoughts on RPG theory.  Looking back on GNS though, I find it to be pretty obvious and mostly useful.  All theories or methods of taxonomy like this, of course, tend to over-generalize, and that seems to be where it’s gotten into most of its trouble.  But in general, the Big Model that flowed out of it is a great way to think about roleplaying.  I guess the bigger question is whether or not we really need to have RPG theory at all…

As far as how I’d categorize myself, I’d say that I am, and have pretty much always been, more of a Narrativist.  I can certainly slip into a Gamist mode at times (particularly when playing 3/3.5 edition D&D), but as a life-long GM, story has always what’s been most important to me.

6.  What are your current hot games – board and rpg?

6) For RPG’s, my hot games are definitely Diaspora and Fiasco right now, but I’d really love to play some Dogs in the Vineyard, Dirty Secrets,  Don’t Rest Your Head, Primetime Adventures, and a ton of other games if I had the time.

With boardgames, it’s a lot harder (since I play so many).  My all-time favorites are Pandemic and The Princes of Florence, but my current “hotties” would probably be Macao, Catacombs, Forbidden Island, Notre Dame, Peloponnes, Cyclades, and (with Samantha) Go Away Monster! 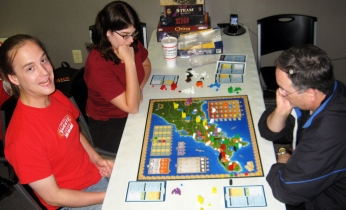 7.  Include any links or sites you would like people to visit.

My first real article on gamerchris.com (Luck and Chaos in Gaming): http://gamerchris.com/2007/04/21/luck-and-chaos-in-gaming.aspx

The Metagamers (where you can still download their old podcasts):  http://themetagamers.com/

The Big Model at Wikipedia: http://en.wikipedia.org/wiki/The_Big_Mode

That was a great interview, Chris. I’m really interested in playing Dogs and Don’t Rest Your Head soon. And everyone knows that Fiasco is my current go to game. Notre Dame has risen high on my list thanks to being our GOTM last month. I have a copy on Princes of Florence on order.

Again, I appreciate the interview.

Join me here again soon for another interesting interview.

Go Forth And Game!

2 thoughts on “A Conversation With…Chris Norwood”